On page 141, of my genealogy book, PEYTONs Along the Aquia, there is a conflict with the maiden name of the wife of Henry Lindsey PEYTON. We cannot be sure whether she was Elizabeth PAIN or Elizabeth BURDEN. In William Montgomery Sweeny's Marriage Bonds and Other Marriage Records of Amherst County, Virginia 1763-1800, 1937, page 59, her name was given as PAIN: "Peyton, Henry, and Elizabeth Pain, married by the Rev. Benjamin Coleman." However, I recently encountered a death record for her in West Virginia, Deaths Index, 1853-1973, where she was recorded as the daughter of A. and L. BURDEN of Amherst County, Virginia. Perhaps the original marriage record in Amherst County, Virginia may shed some light on her true family name.

Posted by Edna Barney at 9:29 PM No comments:

I continue to receive inquiries about the PHILIP PEYTON in my book on pages 22, 23, a descendant of the PEYTONS ALONG THE AQUIA, who lived in Westmoreland and Stafford Counties, Virginia. People are confusing him with another PHILIP PEYTON, a documented indentured servant from Bristol, England, who lived in Northumberland County, Virginia. I have already written about Philip Peyton of Northumberland.

NOTE: Northumberland and Westmoreland Counties separated in 1653, and Stafford County was formed from Westmoreland in 1664.

The latest query on PHILIP PEYTON indentured servant from Bristol, involves this record that I found in Northumberland County, 1667:


"Records of Indentured Servants and of Certificates for Land Northumberland County Virginia 1650-1795," W. Preston Haynie, 1996, pages 87, 88: "421, 20 Oct. 1667 -- Wheras by ye Complynt of Philip Peyton & ye Testamony of some of ye neighbors. It appeares ye Phil: Peyton & Nath: Garner, servts to Rich: Nelmes, have grivous sores on his legges & are very much neglected by their sd Master who taketh nor care to see ye sd sores Cured, It is ordered yt ye sd Nelmes forth endeavour to get ye sd Servts Cured & if ye next Vestry held for this parish Mr Wm Wildey & Mr Wm Downing (who are by ye Court desired to inquire into ye sd business) shall then give their report yt ye sd Nelmes hath been remiss in ye effectual performance of what here ordered yt then ye Court to be further ... therein. OB 1666-78, 12."

In addition, during the same time span I find in the Parish Records of Christ Church, that there were two WILLIAM DOWNINGS in Middlesex County, Virginia. WILLIAM DOWNING and his wife ELIZABETH had a son named WILLIAM DOWNING, born there in 1665.

She became the heroine of Austin, Texas for preserving the city as the permanent Capitol of Texas.


Angelina Belle PEYTON (1798-1860) married her first cousin, Jonathan PEYTON. Their fathers were twin brothers. After Jonathan’s death, and the burning of San Felipe during the Texas Revolution, she moved to Columbia. There, in 1836, she married Colonel Jacob EBERLY, a widower.

I came upon this interesting article featuring Angelina Eberly and her historical connections to Texas while reading the October 2018 Smithsonian Magazine. You can catch up on Angelina's connections to the Peytons of Virginia in my genealogy book PEYTONs Along the Aquia.

On pages 136, 262 and 163 you will find Angelina Belle PEYTON along with her parents, her first husband Jonathan PEYTON and their documented descent from the original Peytons of Aquia Creek, Virginia back to England.

Posted by Edna Barney at 6:23 PM No comments:

On page 94, of my genealogy book, PEYTONs Along the Aquia, Major Daniel PEYTON died "5-5-1826 JACKSON CO ALABAMA" according to updated DAR records.
Posted by Edna Barney at 3:55 PM No comments:

On page 97, of my genealogy book, PEYTONs Along the Aquia, I have updated the vital statistics of ANNE MCGUFFEY. Latest research reveals that she was born about 1723, and died about 1785, in Amherst County, Virginia. She married ROBERT PEYTON in 1754.
She also appears on page 498, of Reverend Hayden's "PEYTON, of England and Virginia" where she is named as ANN GUFFEY.
Posted by Edna Barney at 3:47 PM No comments:

VALENTINE HARRISON PEYTON (a1740 - 1796) appears on page 40 of PEYTONs Along the Aquia Genealogy, along with his two daughters, Anna Maria PEYTON and Susannah PEYTON, and their "negro slave, Jenny." The lineage of these PEYTONs is documented back to the original immigrant to Virginia and his English ancestors. He is the same "VALENTINE PEYTON" documented in Reverend Horace Edwin Hayden's 1891 genealogy, "PEYTON, of England and Virginia", on page 563, where his will is included. He was named "HARRISON" to honor his grandmother who appears on page 38. The William PEYTON who was a witness to his will, seems to be his nephew, who relocated to Jefferson County, Kentucky. See page 71 for William's lineage. The wife of Valentine Harrison PEYTON is unknown; she was not mentioned in his will. She was not the Sarah HALE, suggested as a possibility by Reverend Hayden. That "Sally" HALE appears on page 71, married to another nephew, namesake Valentine PEYTON.

In the Index to Prince William County, Virginia Wills there is "1801 Peyton, Valentine dec'd, Book H, page 429, Sales" which probably refers to this Valentine Peyton who died in 1796, leaving orphans in Virginia. 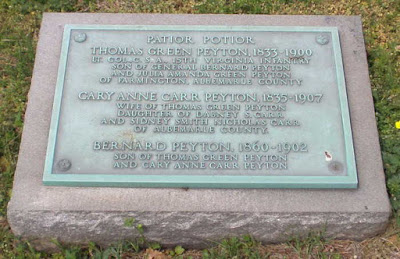