The William PEYTON who died in Cincinnati, Ohio, whose wives were Nancy HOWARD and Catherine BARNHART, has never been proven as a Revolutionary War patriot for DAR membership. He did serve in the war, as is documented by pension records initiated by his second wife. He likely has descendants today, as he had children. William PEYTON and his wives appear on page 139, of the newly released Second Edition of "PEYTONs Along the Aquia Genealogy".
Posted by Edna Barney at 5:46 PM No comments:

William PEYTON was a descendant of the PEYTONs of Aquia, and a soldier of the Revolutionary War. He and his wife and their descendants are documented on pages 500, and 527 of Reverend Hayden's 1891 "Peyton, of England and Virginia from Virginia Genealogies." Their lineage is traced in the newly released Second Edition of "PEYTONs Along the Aquia Genealogy," 2009, where they appear on page 71.
Posted by Edna Barney at 4:50 PM No comments: 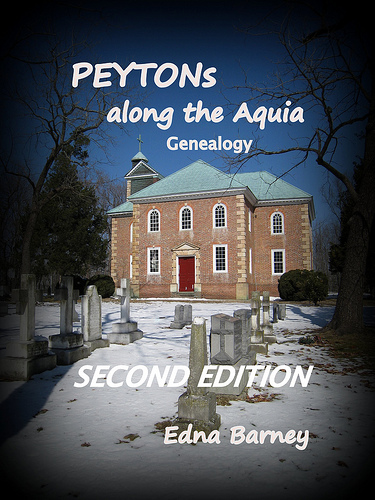 PEYTONs Along the Aquia Genealogy

I have just finished the "Revised and Updated" Second Edition of my genealogy book of the PEYTON family of Virginia, - PEYTONs Along the Aquia Genealogy. It is now available as a "keepsake" edition in hardcover.
Posted by Edna Barney at 7:50 PM No comments:

Celia PEYTON's age and relationship to the PEYTON family of Gloucester County, Virginia is revealed when she was appointed executrix of her uncle Robert PEYTON's 1759 will. It is all explained on pages 470 and 471 of PEYTON, of England and Virginia, 1891, by Reverend Horace Edwin HAYDEN. Her sister Ellen PEYTON is cited along with brother Stephen PEYTON born 1756.
Posted by Edna Barney at 2:49 PM No comments:

The William PEYTON who died 1792, in Bourbon County, Kentucky, was from the Gloucester County, Virginia line of PEYTONS. William was  documented by his grandson in Reverend Hayden's "Virginia Genealogies" of 1891 ("PEYTON, of England and Virginia", ISBN 1438282710, pages 470, 471), who gave his date and place of death. William PEYTON is a proven DAR patriot, having served in the Gloucester County, Virginia militia during the American Revolution. His grandson said he "carried in his body to his grave a British bullet." Those who can prove descent from him qualify for membership in both Daughters of the American Revolution (DAR) and Sons of the American Revolution (SAR).
Posted by Edna Barney at 2:39 PM No comments: